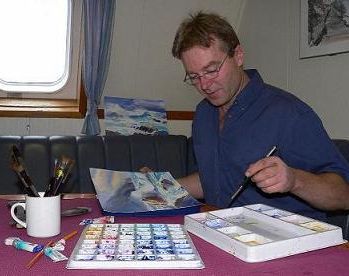 Alfred Memelink is a New Zealand artist who is becoming particularly well known for his streetscape and seascape paintings, especially of the Wellington region.

He is largely a self taught artist, having taught himself whilst working at sea as a marine engineer. During the long sea voyages, he often painted the scenes that drifted past his porthole or the exotic ports that his ships visited.

With many seagoing adventures now behind him, Alfred now only works part time at sea to allow him to pursue his deep passion for art more fully.

(He can still be found from time to time though filling in as engineer on the little red tug boats darting across the harbour).

His special affinity for Wellington, its harbour together with his first hand knowledge of ships and the sea, has provided him with a very special approach to his art.

As a subtle symbol of his connection with the sea, one will always find a seagull somewhere in a painting (aside from the albatross that flies under his signature). Alfred’s ability of conveying to the viewer his excitement found in the scenes portrayed, is resulting in a strong local following and is also winning him international recognition. His work is characterised by interesting perspectives with tangible moods and an expressive use of colour.

Alfred is at one with the watercolour medium in particular but he also enjoys pushing the boundaries of art in other areas such as 3D crafts and by further developing his unique collage style artworks. He also finds other means of creative expression through his photography and through music as a jazz saxophonist.

He is also a long standing committee member of Watercolour New Zealand, in 2007-2009 and 2013-2014 serving as president. He has been a council member of the New Zealand Academy of Fine Arts for several years and was elected as artist member in 2004.

Current Exhibition
Address: 223 The Esplanade, Petone 04 9799889
Opening Hours: We're open 10am - 5pm, Tuesday to Sunday, (closed Mondays) for your art viewing pleasure.
FREE entry and easy parking right outside and on the beachfront.