From a place of worship to popular heritage site: art exhibition charts the history of Old St Paul's

Exploring and celebrating the beauty of one of the city's landmark churches is at the heart of a new art exhibition, launched this week.

The exhibition traces the 151-year history of Old St Paul's on Mulgrave St from pre-European days to the present, through the eyes of several artists.

Old St Paul's visitor services co-ordinator Aingie​ O'Luain​ says the idea for the artistic exploration had been in the back of her head for the past six months.

Alfred Memelink, watercolour artist and owner of Memelink Gallery in Petone, has contributed his piece, Jazz at Old St Paul's, to the exhibition. 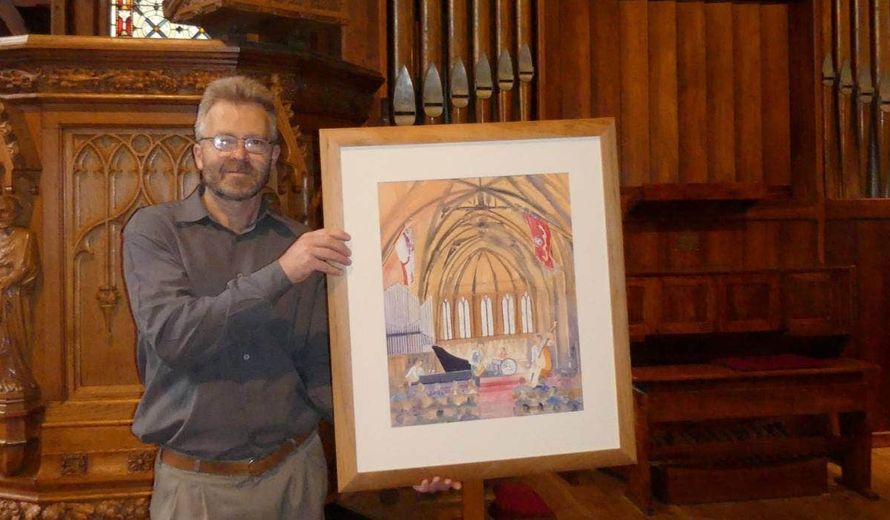 "We've seen a lot of paintings and sketches of the church over the years and it's often portrayed quite differently - it's a personal expression - and the church means a lot to different people."

Of the more than a dozen artworks on display, five are brand new works, created specifically for the exhibition.

"I contacted some artists to see if they were interested in painting for the show and the others had already been painted previously, O'Luain says.

"The church means a lot to different people for different reasons; whether it be religious, heritage or simply appreciating the architecture of a beautiful building."

It took O'Luain and her team about six months to bring the exhibition idea to fruition, with everyone involved excited to welcome the public into the heritage space.

"I think it's certainly an opening for a conversation. People can engage with our hosts on the floor and learn about the history of the church ... it's a visual display of how strong the church has been over the 151 years of its life.

"It's definitely an invitation to discuss the church more."

Built in 1866, the church is one of New Zealand's finest statements of Gothic timber architecture. It served the city's Anglican community up to the 1960s but is now managed by Heritage New Zealand Pouhere Taonga.

"It's not common knowledge that Old St Paul's is no longer a parish church ... it's a great opportunity to spread the message that as part of Heritage New Zealand, we are now non-denominational. You don't have to be religious to have your special life occasions here."